Bright for a short time but dull all the rest of the day. Dry, rather cold. Message before breakfast to see Mrs And. Rodger2 (Mary Dobson) who had considerable haemorrhage from the malignant tumour in her Axilla3. Saw town cases walking + motored to Beechwood + Gib + Lum4. Got small payment from Allan + Hanbury5. Worked up some remarks on cycles + cycling for the Boys Club6. Got some photos from Singer7 of old style bicycles. Buds appearing on Rowan.

1 What happened on 1 April 1921 was actually a lock-out rather than a strike being the mine owners’ reaction to the miners’ rejection of the owners’ terms. During the First World War the coal industry was nationalised by the government and under government control wages, hours and safety improved. At the end of the war miners wanted to retain these improvements. Sir John Sankey led a Commission to investigate and recommended that nationalisation should continue. Under pressure from mine owners the Prime Minister, David Lloyd George, rejected the recommendation and returned the mines to their owners in 1921. 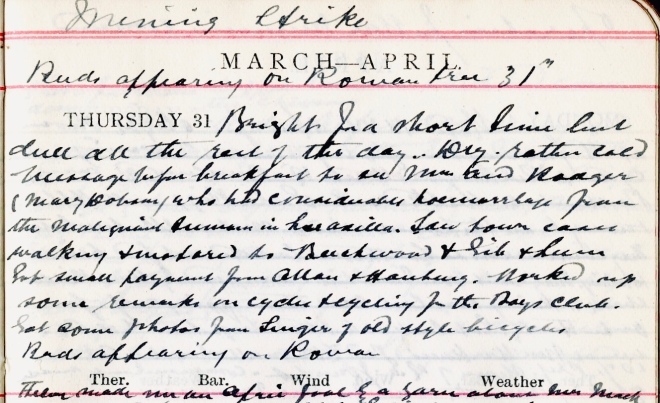