There was no rain all night + with a keen drying N. wind the roads this morning were perfectly dry + splendidly smooth. The change from the mud of yesterday was perfectly marvellous. David [Graham, co-partner] + I motored to Gala to Phyllis Dees’ funeral1. We arrived just in time for the service but didn’t go to the cemetery. I saw town cases before + after. At 2.30 got message to Mr Linton2, Oakwood. Cycled up. It took me 73 minutes to do the 9.5 miles + a visit of 15 minutes. Barbara3 had a walk with Helen [Muir] + came to tea. At 10.30 p.m. they ‘Phoned from Faldonside for Mrs Dees4 + I motored down. The poor thing had collapsed + no wonder.

A howling NW Gale with torrential rain + some sleet.River very big. Fair + starry at night but still blowing hard. Motored to Riddell to see Mark Sprot1 who was alone, his wife being at Kingsmeadows2. The road from Haining Gate to Clerklands in a most disgraceful state + more like a ploughed field than a metalled road. Ran down to Faldonside + saw Mrs Dees3. Went up stairs + saw the poor girl’s remains4. I had a most kind + appreciative letter from Dees in which he thanks D. + me. Pollok5 called in afternoon to see me about the death + gave me a long [word deleted] story about the girl who hung herself at Gala. Jack6 called in the evening + I showed him the letter from D Ingles7 asking me to approach Jack about a loan. We advised him to say a man who is employing him to paint portraits. 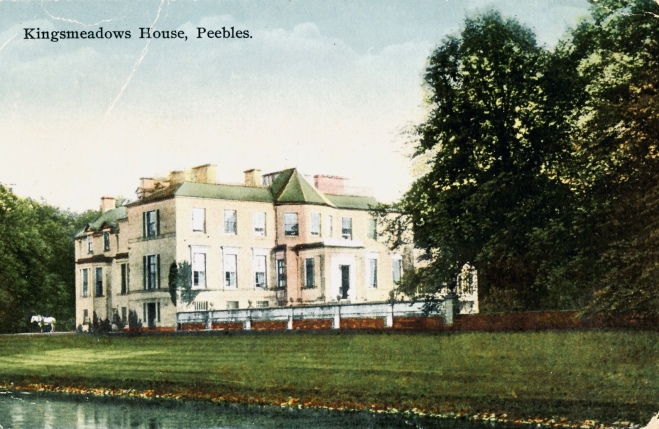 Another dull day but with one or two blinks of sunshine: no rain. Phyllis Dees1 died this morning at 8.10 + Dav. came up soon after. We had an operation at 10 viz. curetting Mrs Imrie2 at her sister’s, Mrs Brodie, Goslaw Green. I saw 10 town cases. Finished posting the ledger for Nov. a record on the 2nd day of the month following. Wrote Jean3, Miss Forsyth (for Mrs Bullough4) [and] Dr Robertson5. I intend going on Monday (D.V.) to see Mrs B6. Nancy + Barbara7 at tea. Nancy has given me a present of 2 sets of flannels for Xmas. It is awfully good of her.

1 Phyllis Mary ‘Fiff’ Dees (1899-1920), died 2 December 1920, aged 21, of a fractured base of skull and staphylococcal meningitis three months, death certified by D Charteris Graham M.B., Ch.B.; she was daughter of Robert Irwin Dees (1872-1923) and Edith Mary Boileau Dees née Henderson, the new (1920) tenants at Faldonside and had been involved in a car accident near Berrybush while travelling between the Gordon Arms and Tushielaw

2 Thomasina McDonald had married Robert Brodie at Selkirk, 1893 while her sister Jemima married William Imrie at Selkirk, 1901; they were the daughters of John McDonald, tailor, and Margaret McDonald née Emond

5 George Matthew Robertson (1864-1932), M.D., LL.D., F.R.C.P.ED. Physician-Superintendent of the Royal Edinburgh Hospital for Mental and Nervous Disorders, and Professor of Psychiatry in the University of Edinburgh; his address was Tipperlinn House, Morningside Place, Edinburgh

The Scottish Reformation Society exists to defend and promote the work of the Protestant Reformation in Scotland. We do this by organising meetings, by publishing literature, by running an essay competition, and through the work of our local Branches.

The Scottish Reformation Society has been evangelical, Protestant, and non-denominational since its foundation in 1850. Membership of the Society is encouraged and is open to all who support its aims. [https://www.scottishreformationsociety.org/about-the-scottish-reformation-society/]

The Hospital was set up to cater for people presumed to be incurable and in need of constant medical supervision. Such patients were unable to receive attention at the Royal Infirmary of Edinburgh, which did not have facilities to look after long-term cases. [http://www.lhsa.lib.ed.ac.uk/exhibits/hosp_hist/incurables.htm#:~:text=In%201874%20the%20Edinburgh%20Association,Royal%20Edinburgh%20Hospital%20for%20Incurables.]

Alnwick Hill Laundry was actually the Industrial Home for Fallen Women situated on the Stanedykehead, just off Alnwickhill Road, SSE of Liberton House, near the Alnwickhill Waterworks [Canmore ID 105853] and “… established 1856 for the restoration of young women willing to return to the paths of virtue … the chief employment of the women is washing and laundry work, with a little needlework …” [Source: W M’Bean ‘On the Edinburgh Industrial Home for Fallen Women, Alnwick-Hill, near Liberton’ Report of the British Association for the Advancement of Science, 41st Meeting, 1871, pp 212-213 https://www.biodiversitylibrary.org/page/29363088 and https://www.biodiversitylibrary.org/page/29363089 and Ordnance Survey 25 Inch Edinburghshire VII.4, published 1914 https://maps.nls.uk/view/82877886 – all accessed 2020.06.13]

Society of the Sons of Ministers of U.P. Church not identified

I am gradually being superseded at Faldonside1 by David2 . He stayed all last night + went back again tonight + gave an intravenous saline. I went down at midday + found the patient just the same. It is a most depressing situation to feel shelved + ousted after 53 years hard work. I don’t think David means to do it but he doesn’t seem to consider my feelings at all. This was a fine day + no rain. David went to Edinburgh today + Baptie3 met him at Lindean at 5.40: took him down to Faldonside: brought him back + took him down to stay the night.

1 Dr Muir is being superseded in overseeing care for Phyllis Mary ‘Fiff’ Dees (1899-1920), daughter of Robert Irwin Dees (1872-1923) and Edith Mary Boileau Dees née Henderson, the new (1920) tenants at Faldonside; she had been involved in a car accident near Berrybush while travelling between the Gordon Arms and Tushielaw

David [Graham] came up early from Faldonside. He reported Miss Dees1 rather better but when I cycled down at 3 I did not notice much improvement. The roads were frightfully heavy + very bad at Lindean where they are laying the electric cable. It was a delightfully mild sunny day: duller in afternoon + raining at night. Dav. was at Thirlestane2. Helen went to a sewing meeting at Knowepark School3 at night. I called at Wellwood4. Got Day Book filled up for Nov.

1 Phyllis Mary ‘Fiff’ Dees (1899-1920), daughter of Robert Irwin Dees (1872-1923) and Edith Mary Boileau Dees née Henderson, the new (1920) tenants at Faldonside; she had been involved in a car accident near Berrybush while travelling between the Gordon Arms and Tushielaw

2 Thirlestane was home to the Lord Napier and and his wife the Hon. Clarice Jessie Evelyn Napier née Hamilton, Lady Napier

4 Wellwood, Ettrick Terrace, Selkirk was home to Dr Muir’s second daughter Nancy, with her husband Jack Roberts and their children 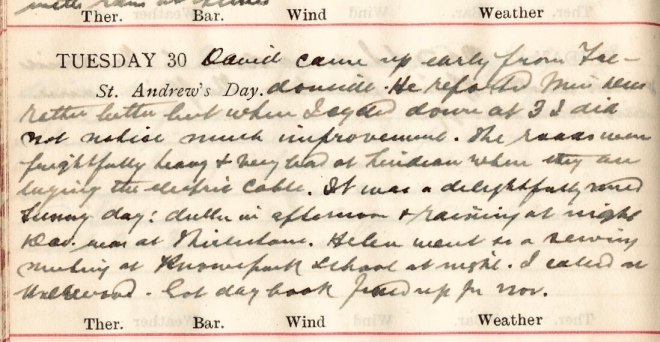 They ‘Phoned from Faldonside about 8 that Miss Dees2 had had a collapse + D. [Graham] + I went down first thing. Found that there had been a purulent discharge from the scars which had interfered with her breathing but she had rallied when we got down. I stayed all day + came home when D. came down again at 11. D. went down + stayed the night. He got Mrs Miller over at 1.30 this morning but the child was dead. I felt better today. Helen + Mrs Dickson3 (Jean Harper) walked out to the meet at ½ Crown Corner4. It was [a] dull misty day with rain at times.

1 About 40 fires were set in warehouses around Liverpool Docks by the Liverpool IRA causing £500,000 damage [Gerard Noonan ‘An eye for an eye’: The IRA’s campaign in 1920s Britain]

2 Phyllis Mary ‘Fiff’ Dees (1899-1920), daughter of Robert Irwin Dees (1872-1923) and Edith Mary Boileau Dees née Henderson, the new (1920) tenants at Faldonside; she had been involved in a car accident near Berrybush while travelling between the Gordon Arms and Tushielaw

I was very miserable all day with dyspepsia + took very little food. Went down to Faldonside in morning. Miss Dees1 no better + very lethargic. On my return was called to Mrs Millar2 (a Ronaldson), Bridge Street a primip. Went back + forward three times + felt very fagged. David [Graham] kindly took charge of the case for me. It was a cold wet day from N.E.

A wet disagreeable day. Mrs Mackintosh took her sister Mrs Simpson1, Helen2 + Mitchell3 in a motor car to the meet at Ashkirk. I went down to Faldonside in the morning + David went at night + injected a vaccine (stock) into the spinal cavity. I saw about a doz. town cases. Feeling rather dyspeptic.

3 Perhaps Alexander Mitchell (fl.1920), chauffeur to John Roberts junior, who had fallen off a horse on 2 October 1920 whilst riding at Headshaw with two of Dr Muir’s grandsons

David [Graham] + I went down to Faldonside + did another spinal puncture1. The fluid came out more strongly.

1 Presumably on Phyllis Mary ‘Fiff’ Dees (1899-1920), daughter of Robert Irwin Dees (1872-1923) and Edith Mary Boileau Dees née Henderson, the new (1920) tenants at Faldonside; she had been involved in a car accident near Berrybush while travelling between the Gordon Arms and Tushielaw