Sharp hoar frost: sunny morning + roads drying but it got colder + in the afternoon there were heavy blasts of rain + sleet + Foulshiels was white at 4. Cycled to Faldonside to see Jessie B1. Met the Lauderdale hounds on their way to meet at Sunderland Hall. Jessie + I walked along to the point overlooking Tweed Bridge + saw the hunt going up + over Linglie Hill2 + I saw the hounds again opposite Neidpath3 where I met Jack Lindsay4 on his way home. I saw a hound as far up as the Craig. Helen + Barbara5 walked to Linglie Hill + followed + Jack, Nancy + Tim6 were riding. I got a heavy shower just when I came to Mill Street.

2 Jessie Boyd and Dr Muir saw the hounds from the Tweed Bridge at the confluence of the Tweed and the Ettrick Water (grid reference NGR NT489,324) as the hunt crossed Linglie Hill on its way into the Yair Hill Forest

3 The hunt was later in the Yair Hill Forest, in the area between Yair and Ashiestiel on the west side of the River Tweed (the Craig presumably being Craig Hill) and opposite Neidpath Hill just south of Caddonfoot on the east side of the Tweed 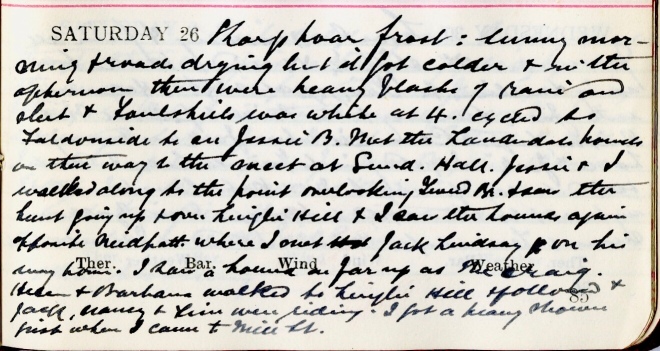