Keen frost this morning: surface water frozen: not clear like yesterday but quite sunny till evening when it drizzled + then rained. The old man’s 95th birthday passed off successfully1. He had letters from friends + flowers [?]. He was disappointed there was none from Lizzie2 not knowing she was coming down. I met her + Nancy3 at 12.20 + their coming was a great surprise to Mr R. We had the /75 Madeira4 + early dinner + took R. out for a short walk. Lizzie left about 6 + I walked to the station with her. Mr Gibson the U.F. minister5 called in the evening. Rennie talked almost without remission + chiefly of course about himself + his doings. He has a wonderful memory + is very entertaining. I found that he had seen his great grandmother (when a boy of 6-8) who was born in 1738 + died in 1836. He also remembers living in St. James Square at the age of 4, having been born there.

1 This was the birthday of the Reverend James Rennie (1826-1924), Church of Scotland minister and widower of Catherine Stewart Muir, thus Dr Muir’s brother in law; living at Prestwick, Ayrshire

3 Assume Agnes Amelia ‘Nancy’ Roberts née Muir (1878-1948), Dr Muir’s second daughter; it is quite possible that she had travelled part of the way with Lizzie Guthrie Smith, her cousin 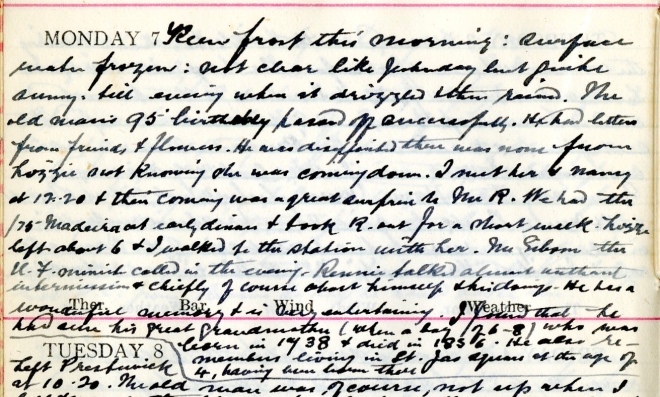