Another delightful day. Calm + mild. It was our Communion + I was all ready to go when a hurried message came to see Mrs Heard1, Castle Street. Thinking it might be a confint I went up to find it was alright there but it made me too late for church. Poor old Tom Dunn2 died at 5 this morning: another of my oldest friends gone. There is no doubt the shock of Tom Roberts’ death3 brought on his illness. I called for Miss D.4 I had also to see Robert Currie Sen.r5 with haemoptysis. Went to evening service where Smith of the Congregational6 preached. Mrs Mack7, Nancy + Jack8 came to supper. 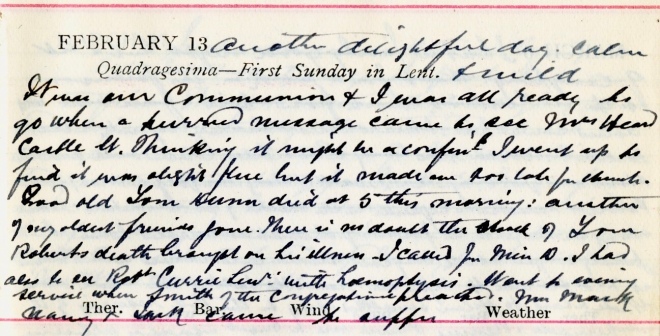