Dense fog the whole day but no rain of course no drying either. N.E. [wind] slight. Pottered round the town. David at Bowhill seeing the Duke1. Ah me!! How are the mighty fallen!!2 Did clerical work in afternoon. Helen + Nancy3 were doing the Girl Guide work. Mrs Mack, Nancy + Barbara4 came to high tea at 6 (which I was prevented going by a crowd of panels5) + went to ‘Mr We’6 at the Picture House. Got a Dumfries paper, presumably from Kate McD, with a very appreciative notice of her husband7.

2 This is not the first time that Dr Muir has expressed sorrow at being overlooked on account of his age: on 4 September 1916 he wrote “Got a terrible shock from a letter of Mrs Dunlop’s announcing that she has been ill & had called in another medical man as ‘we thought we would rather have a younger man’.” and in a memorandum to Mrs Dunlop “I am unconscious of any signs or sensations of Senility. It certainly cannot be physical for I cycled 81½ miles the day before yesterday & was quite fit at the end. Without boasting, I don’t believe there is another medical man in the Border Counties who can do the same thing.” [Heritage Hub SBA/657/19/47] 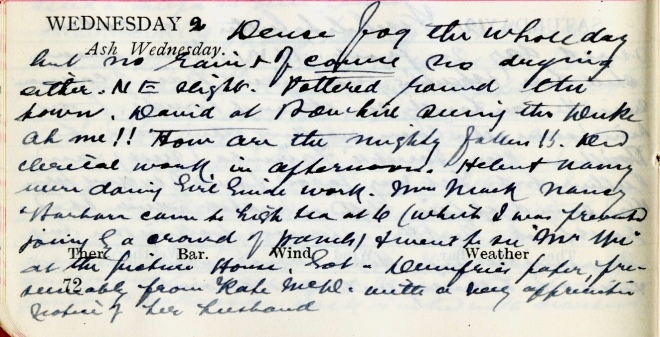