This is one of our occasional posts of 1913 transcripts, prompted here by the changes brought about by the The National Insurance Act 1911

Soft + slushy again + quite mild all day till evening when it began to freeze. Nancy2 took Stewart3 to Edin. to consult Stiles4. Went down to Wellwood + saw them off. Got message to Bell5, Magdalen Cottage, Linglie. It was to see George, youngest son of the people I used to attend there many years ago6. He is an epileptic + lives there with his brother John + sister Joan7. Walked there as Jean8 had gone to Melrose in the motor. In the afternoon got message to Miller, Fairnilee9 where the younger boy looks like measles. Going down the hill to Yair the near back tyre – studded [word missing], burst. It has run since Aug. 19th. Norman Grieve10 came at 9 O’clock. Nancy was to have entertained him + a Mrs Howard Kerr11, a lecturer of the Imperial Mission + she has gone to Bridgepark12.

1 The National Insurance Act 1911 included “Medical treatment and attendance, including the provision of proper and sufficient medicines, and such medical and surgical appliances as may be prescribed by regulations to be made by the Insurance Commissioners (in this Act called “medical benefit”)”

7 Joan Bell (1858-) and John Bell (1859-); his other siblings were Euphemia, Helen, Elizabeth, Alexander, Caroline and Williamina

10 Mrs Howard Kerr is not identified other than as a lecturer for the Imperial Mission; see also diary entry for 16 January 1913

11 Norman Grieve appears to be Norman William Grieve (1852-1936), son of William Grieve and Sarah Clark, born Hawick, who worked in tropical agriculture and as the director of public companies (rubber and tea companies according to A Hawick Word Book); see also diary entries for 16 and 17 January 1913 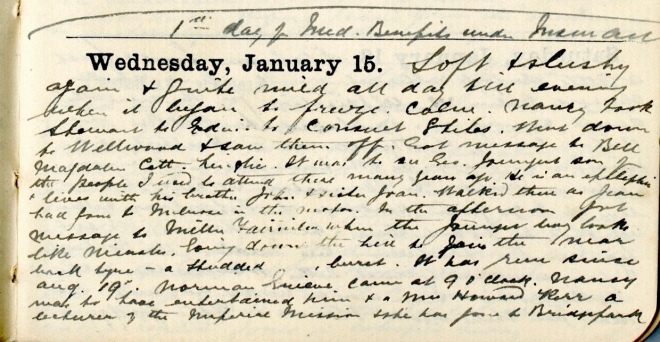