This has been a most perfect autumn day: calm, warm, sunny but harzy [?]. The weather cock pointed E but there wasn’t a breath of wind. After seeing half a doz. town cases. I left at 12 +, calling for Miss Hall3, Heathpark, cycled to Maxton, Fairnington, Nisbet, Ancrum + home by Ancrum Craig + Belses Moor, a run of 38 ½ miles4. It was a perfect day for the open + I took it quite easy. Took my tea at the edge of what I think is Upper Nisbet Moor between Rutherford + Roxburgh5. I had only once been past Fairnington before + that was coming the other way, and only once on the road from Ancrum to Belses Moor.

1 The National Archives’ website states that “In the summer of 1920 the economic boom collapsed. As prices and unemployment rose further, industrial strife became more likely. The unions planned a revival of the pre-war Triple Alliance between mining, transport and railway workers. The miners began a strike for higher wages in October 1920, with railwaymen and transport workers threatening supportive action. The government passed an Emergency Powers Bill to ensure essential services and negotiated a temporary six-month increase in wages.” Emergency Powers Bill 1920 accessed 2020.10.02

5 It is difficult to be sure from the description but Dr Muir’s likeliest route was along the unclassified road through Big Wood at NT661,294 with Upper Nisbet Moor (centred around NT667,284) to his south but if he had his tea between Rutherford and Roxburgh it is more likely that by then he was on Roxburgh Moor (NT676,296) 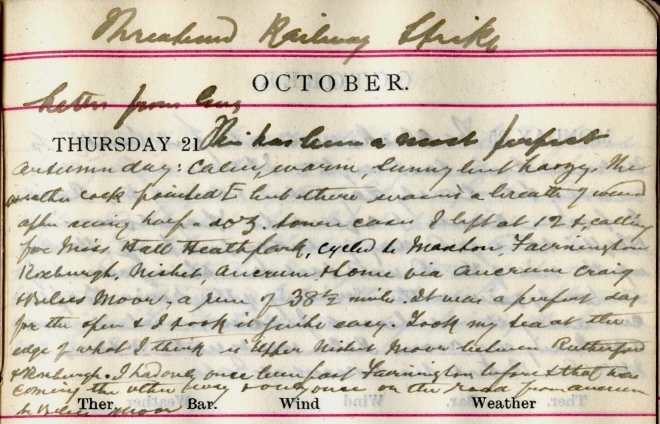