Dull morning: slates + pavements wet but it turned out a very fine day. Message to Mrs Henry1, Middlestead which Dav. [Graham] did on his way to Thirlestane. I saw 3 town cases + then motored with Tom Alexander2 to Faldonside, Bogle House, Caddonfoot (Mrs Stenhouse3) + on to Manor Water Sanatorium4 where I saw Rob. Scott5 + Peggy Lockie6. The Matron showed me round the place. We lunched by the side of the Manor Water + came home via Cademuir + the right side of [the River] Tweed. Had a confinement at night: Mrs James Turnbull, Ettrick Terrace7.

1 Peter Henry, ploughman, was Inhabitant Occupier of a house at Middlestead, Selkirk, 1920 Valuation Roll; his (second) wife was Agnes D Craik (1892-1972), a domestic servant at Costerton, Crichton, Midlothian when they married on 30 April 1919 at the Lawson Memorial Free Church Manse 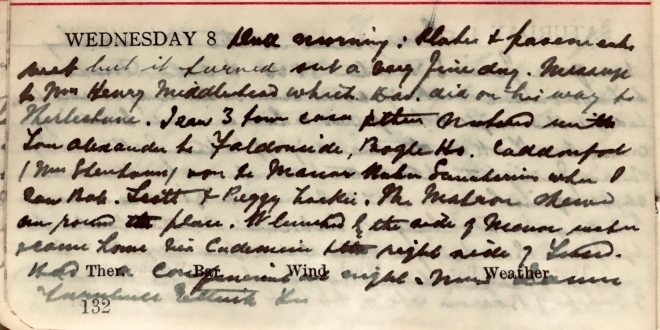