See Sunday April 25 [this has been corrected in the transcript]

Cold N.W. wind but not much rain. Dry in afternoon. Message to R Currie, Rockville1. Cycled up at 9.40 + found him with suspicion of appendicitis which was confirmed when I saw him again at 1.15. ‘Phoned for Fraser who came at 5.30 + operated. There was perforation + pus. Currie stood the operation well. I had also a confinement going on with Mrs Andrew Rutherford, 35 Backrow, who fortunately hung on till evening2. I gave chlor[oform] + delivered a F. at 9.45. With these two I was kept pretty well on the run all day. Dora had to go to bed with flatulent colic. Mrs Mc.3 was to have supped with us but I put her off. I got Fraser to see Mrs Nichol, Yarrow Terrace4.

4 Mrs Nichol, Yarrow Terrace, had an operation on 17 April 1920 but appears to be causing concern 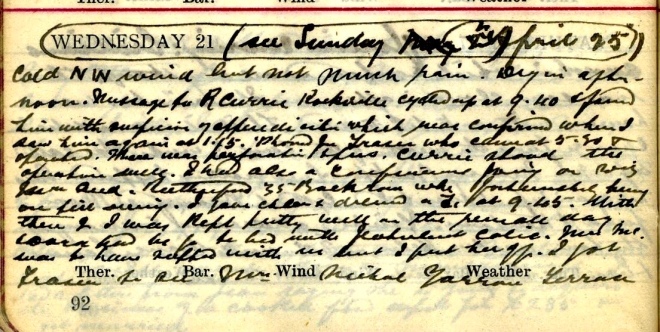