There was a heavy fall of soft snow between 9 + 10 this morning + the streets got very slushy. During the day it rained occasionally. Very dull + dank. Motored to Sunderland Hall + Bridgelands after seeing a town list of 12. Got a few Christmas cards. I have sent away 52 at least I will when I have Miss Stelek’s1 + Jessie Hayes’2 addresses. There was a Xmas tree at Victoria Hall in connection with Child Welfare. Dav. [Dr David Graham] dressed as a Pierrot + James Connachie as a Turk. David Lumgair3 has his [gramophone?]. Helen was one of the helpers.

1 Fraülein Stelka or Stelek appears to have been a Christmas-time contact, perhaps a relic of an earlier, closer connection; she was previously referred to in Dr Muir’s diary entries of 27 and 29 December 1915, 19 December 1916 (“… calendar from Fraulein Stelka & a note in which she declared her British sympathies”) and 20 December 1917 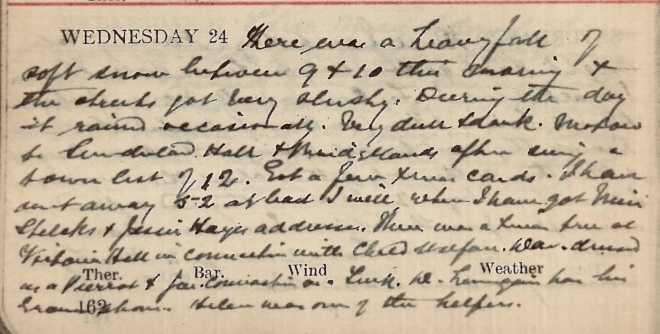